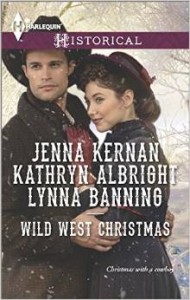 Curl up with a Cowboy this Christmas!

A FAMILY FOR THE RANCHER by Jenna Kernan ~ Rated PG13
Two years ago, Dillen Roach fell for wealthy debutante Alice Truett. Now she’s at his door with his orphaned nephews in tow! Could Alice be the perfect Christmas gift for this solitary rancher?

DANCE WITH A COWBOY by Kathryn Albright ~ sweet romance ~ Rated G
Kathleen Sheridan is determined to leave the tragedy of her past behind her—including brooding cowboy Garrett. But with Christmas magic in the air, can she resist the warmth of his touch?

CHRISTMAS IN SMOKE RIVER by Lynna Banning ~ Rated PG13
Gale McBurney is an utter mystery to rich “city girl” Lilah Cornwell. But to make Smoke River her home by Christmas,
she’ll have to let this rugged cattleman take the reins….

“A triple play of heartwarming holiday stories from authors who know all about the reality of the Wild West
as well as the beauty, strength, love,and pure joy of the holiday season.
These lovely stories will have readers sighing with contentment.” Four Stars/RT Book Reviews

for Dance With a Cowboy ~ in the anthology Wild West Christmas!

Dance With A Cowboy

It’s rancher Garrett Sheridan’s duty to look out for his brother’s widow and daughter when they return to Clear Springs. However, falling for Kathleen isn’t an option—not with the secrets between them.
It would take a Christmas miracle…and he doesn’t believe in miracles anymore.

Garrett held the door open and followed her out into the late afternoon light that filtered through the pines. They stood for a moment, staring at each other. He was taller than she remembered…taller than Josh. And where Josh’s nose had tilted up in a friendly fashion, Garrett’s was straight as a knife’s blade. He didn’t say a word, just turned and started down the boardwalk.

She supposed walking—and talking—would be easier than standing still and looking at each other in an awkward attempt at normality. Although her legs ached from standing all day in the bakery, she fell into step. They headed away from the mill. The sound of the saw’s constant whirring lessened even as the buzz of nervous energy inside her began to build. Their footsteps grew louder on the boards, emphasizing their lack of conversation.

At the corner he stopped.

“We could sit.” He tilted his chin toward the bench in front of the hotel.

They crossed the street and he waited while she settled herself. He didn’t sit, but leaned against the post that supported the small overhang to the hotel’s front entrance. To anyone passing by it looked like a casual meeting, but the sharpness of his gaze belied that. She drew in a deep breath, filling her lungs with the scent of the crisp mountain air. “I’ve missed the smell of the pines. It’s different on the coast. Salt in the air. Brine.”

He raised his chin slightly in acknowledgement. Small lines fanned out at the corners of his eyes, yet she doubted with Garrett that the lines were from laughing.

She nodded, pasted on a bright smile.

“Josh’s daughter,” he murmured. The lines deepened between his dark brows. “You named her Lily?”

“After my grandmother.” He should know this, she’d sent a note after the birth. “She is five now.”

“Why did you come back?”

It was more a challenge than a question. She’d been asked the same thing half a dozen times since her return, but now the answer sounded too simple, even to her own ears. “I wanted Lily to grow up here.”

He seemed to turn her words over in his mind.

She stiffened her spine. She wasn’t about to blurt out all that had really gone on—the snide comments questioning Lily’s parentage. The suggestive glances and remarks from men who thought she was lonely. Her parents’ constant disappointment in her, in Lily.

“The memories are still here,” he said.

Meaning Josh. Those memories. She relaxed slightly. “I have good memories from growing up here—the schoolhouse, swimming in the lake. It’s a good place to raise a child.”

Again, he seemed to consider her answer, looking past the surface of her words. He’d always done that, even when they’d been younger. Her gaze drifted to his lips, remembering her very first kiss and how sweet and gentle it had been. So different from his brother. She frowned, upset at the comparison. She’d come here to move on with her life, not to dwell in the past.

She stood, gathered her shawl closer around her and moved to the edge of the porch. “I’d better go. Sue is in a tizzy getting ready for the season.”

He straightened and moved away from the post. “I’ll walk you back.”

Always the gentleman. He hadn’t changed in that regard.

“It’s not necessary. I’ll see myself back to the bakery.” She started down the steps to the street.

She stopped. She’d been expecting the request, but she wasn’t ready to share her daughter. “Another time.”

“I don’t get into town very often. I can wait until you’re done working.”

“No!” It came out fast—unthinkingly—without tact.

His eyes narrowed. “Do you want to explain why not?”

“I need to prepare her first.”

“Prepare her! What the heck for?”

She raised her chin. “Other than my great-aunt Molly, Lily has no idea she has relatives here.” Before he could say another word, she turned and hurried away.