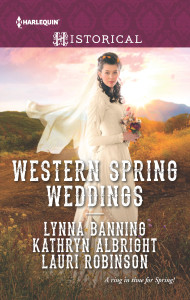 Three heartwarming tales that celebrate
the renewal of Spring

THE CITY GIRL AND THE RANCHER by Lynna Banning

Penniless, Clarissa Seaforth leaps at gruff rancher Graydon Harris’s
offer to become his cook. She’s never cared for a man before,
but surely it can’t be hard to learn…

HIS SPRINGTIME BRIDE by Kathryn Albright

Spring is in the air…Can rancher Gabe Coulter and Riley Rawlins, the boss’s daughter,
find forgiveness and renew the lovers’ vows they made so long ago?

WHEN A COWBOY SAYS I DO by Lauri Robinson

Dal Roberts must make his sister’s wedding a success, which means
accompanying seamstress Ellie to Wichita.
Could there be a double wedding on the horizon…”

Released from prison, half-breed Gabe Coulter must work for his enemy to earn back the deed to his own ranch. But when his boss’s daughter, Riley Rawlins, returns home with a rebellious son after years away in the east, nothing will stop him from discovering the truth.

Riley no longer trust the man she once loved so completely. Years of old hurts and his violent past make it impossible to forgive and allow him back into her life or that of her son.

But one thing Gabe has is pure cowboy grit. Will it be enough to make Riley see that she and her son should a part of his future?

This is the best Harlequin anthology I have read. I loved every one of the three stories.
There is suspense, action, and heart. And, of course, romance.

Gabe paused in the doorway. “Are you just going to stand there? You owe me an explanation.”

Riley followed him into the stable, completely flummoxed. “I owe you?” She didn’t even try to keep the astonishment from her voice.

He removed the tracings from the horse and wiped down the bit with a rag.

The air was still and hot inside the building, and the sweet scent of fresh straw and hay enveloped her. “I owe you?” she repeated, tugging off her leather driving gloves. She slapped them down on a three-legged stool nearby. “You have that wrong, Mr. Coulter.”

He raised his brows. “It has been a few years, but we do know each other…well. You could call me Gabe when we are alone.”

No…oh, no… Rekindling that kind of familiarity with him would not be wise. She had loved him once…and he had used her to get back at her father. She had learned her lesson. Never would she be that gullible again. She raised her chin. “Just what are you doing working here? If I remember correctly, you hated my father!”

Gabe looked up from his task. “He happens to hold the deed to my ranch. I’m working it off. Figure it will take about five years. After that you will both be free and clear of me for good.”

She blinked. Their lives had been entangled for years because of Brody and she doubted they would ever be totally free of each other. “Your ranch? How did that happen?”

“He paid the back taxes while I was in prison.”

Her father had omitted that small point when she had asked him about Gabe’s presence on the ranch. What else had been carefully omitted? “You never cared about your property before. You said it tied you down. You always wanted to escape.”

He dropped his rag onto the bench. “That was a long time ago. People change. I changed.”

“Before that. Prison made it clearer.” He closed the gap between them until he stood right in front of her. “My turn. What took you so long to come back, Riley?”

His brown eyes drew her in and his deep voice could easily mesmerize her if she wasn’t careful. “It’s…complicated.”

She inhaled long and deep. She didn’t want to tell him that it was because of him, because he’d hurt her in turning his back on her when she needed him. “I suppose stubbornness more than anything. I liked Philadelphia and wanted to raise Brody there. I wanted to be near my mother and she didn’t want to come back.”

“I remember her,” he said, his tone slightly hostile. “You loved this place. I never thought you’d leave for good.”

She pressed her lips together. He had always been able to see through to her true thoughts.

“It was nearly for good,” she whispered. She didn’t want to talk about herself. The topic could too easily come to questions about Brody, which she wasn’t prepared to answer. “What about you? How did you end up in jail?”

He didn’t seem upset with her question. Slowly he turned away and hung the tack up on the wall hook. “I killed a man.”

Even though she knew it, to have him say it so bluntly, so matter-of-factly, shocked her. “You always did have a temper.” It was the wrong thing to say.

His lids shuttered down. He started looping up a rope, winding it methodically between his thumb and elbow.

“I shouldn’t have said that. It’s just…that’s how I remember you—always with a chip on your shoulder, ready for another fight.” When he still didn’t speak she added, “There must be more to it.”

A muscle worked in his jaw. “It was an accident.” He looped the coil over a stall post and turned to face her. “I was working at a ranch south of here. The owner got familiar with his kitchen help—a young girl he had hired for a party. After most of the guests had gone home, he cornered her in the pantry. I happened to be passing through the kitchen and stopped him—forcefully. During the fight he pulled his gun. It went off. In the end I was the one still standing and he was dead.”

“You shouldn’t have been accused of murder.”

“I wasn’t. It was manslaughter, but I was considered dangerous.”

“Y-you are not dangerous.”

The glint in his brown eyes darkened…nearly as black as his lashes. “I can be,” he said, his voice low and sure and steady.

His gaze fell to her lips and then slowly raised again to her eyes.

Her mouth went dry. Did he think to kiss her? Her knees went weak with the thought. She doubted that she could move if he acted on that impulse.

Slowly he dragged a calloused finger down her cheek. It left a trail of fire in its wake. “I’m all grown up. I can be dangerous.”

Her heart fluttered in her breast. “Gabe…” Was he playing with her? She thought to bolt—a silly aspiration considering she could barely breathe.