THE GUNSLINGER AND THE HEIRESS 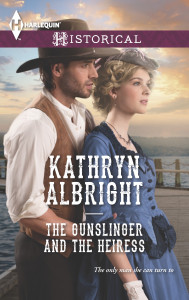 Years ago, heiress Hannah Lansing was forced to give up the man she loved.
Now, to save the family business, her grandfather demands she marry someone she feels nothing for.
Torn between duty and desire, there’s only one man Hannah can turn to.

Gunslinger Caleb Houston is shocked when Hannah arrives in San Diego.
He never expected to see her again! In the eyes of society, they’re worlds apart, but can Caleb finally convince Hannah
to put her own happiness first and trust in the power of the love they share?

“A fast-paced, sensual, delightful read of lovers torn apart by duty and reunited by destiny.
They will face anything–even death–to be together.” Four Stars! RT Reviews 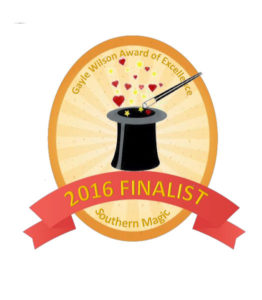 The property encompassed the entire crown of a prominent hill. He stopped before entering the wrought-iron gate and checked the view of the harbor below. A long, low whistle escaped. Several sailing vessels with their tall masts lined the wharves beside smaller fishing boats. Beyond them, a swath of deep blue water glistened under the setting sun. Hannah must have felt like a queen to see this every day.

He turned and strode up the long cobbled drive. Around a tree-lined bend, the mansion emerged—elegant, white stucco surrounded by an expanse of green grass. The place hadn’t changed much since the last time he’d seen it. Five black carriages parked in front of the estate and more conveyances had pulled off under the trees. Gas lanterns spilled light along each side of the marble staircase leading to the front entrance. At the base of the stairs, a large fountain sprayed sparkling water into a shallow pool.

He swallowed, feeling wholly out of his element. At the door, the butler pursed his lips, but reluctantly allowed him in. He stood in the entryway under thick cherry wood beams that crisscrossed the white domed ceiling. Down the wide hallway came the sound of deep voices interspersed with high twittering and the smell of something sweet baking—cookies or maybe a cake. The flash of a dinner jacket in a doorway had him looking down at his leather jacket and canvas pants.  Guess he was a bit underdressed for the occasion. He removed his Stetson—the only new thing he owned.

When someone finally emerged to meet him, it wasn’t Hannah or even Rachel. It was Dorian Lansing. Leaning slightly on the cane that had always been a statement of his power, he strode down the hall decked out in a stiff new suit. The ruffles at his collar seemed out of place on such a man. His appraisal was quick, but Caleb felt as if he’d been turned inside out and inspected thoroughly for bugs.

Dorian nodded briefly. “Mr. Houston. It’s been a while.”

“I’ve just arrived in town. Thought I’d let my sister know I was here and say hello to Hannah. Don’t mean to interrupt anything.”

Dorian peered at him with those piercing blue eyes. The years might have watered them down some but hadn’t blunted their sharpness. “You’ll understand if I don’t invite you in. This is an exclusive gathering. I will inform my granddaughter you stopped by.” Without waiting for a response, he turned back toward the party.

The Gunslinger and the Heiress
© 2016 by Kathryn Albright
Permission to reproduce text granted by Harlequin Books S.A.