THE ANGEL AND THE OUTLAW 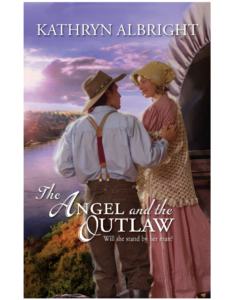 Stuart Taylor is on the run from murder and doesn’t need Rachel Houston’s interference, but the outspoken woman has other ideas. However, her plans don’t include caring for the obstinate man.  When the law catches up to Stuart, she must decide where she will put her trust.

The Angel and the Outlaw is a historical romance set in 1873 San Diego. It’s a time when the town went overnight from boom to bust, the whales were gone, the gold was nearly mined out of the mountains and the last of the infamous bandits still roamed California.

“Kathryn tells a terrific story. Heartwarming, poignant, and with enough plot twists to keep the story moving quickly, The Angel and the Outlaw is a book I know I’ll read time and again. Well done!”  Romance Reader at Heart.

“In true historical style, The Angel and the Outlaw swept me away to the coast of Southern California. This author delivers an intrinsically woven tale that kept me riveted as each page was turned. I happily recommend this emotionally gripping book.” Romance Junkies

Excerpt ~ The Angel and the Outlaw

At the sound of someone running up his ship’s gangplank, Matthew Taylor looked up from the scatter of charts on his desk.

“Matthew! Let me in! I must speak with you.”

He strode to the door and stopped short at the sight before him. “Linnea!”

The light of the cabin’s oil lamp exposed harsh bruises against the pale skin on her face. Blood dripped from a cracked lip. Under the dark hooded cloak, her blonde hair, usually swept up in the latest fashion, hung unkempt to her shoulders.

“My God! What happened?”

“I–I killed John!” she gasped. “He was going after Hannah.”

Suddenly he realized the bundle she held was her daughter. “Let me take her.” He pulled the cover away, breathing a sigh of relief that Hannah was free of any sign of battering. She was shaking, just as her mother was. He laid her on his bunk and turned back to Linnea.

“Tell me what happened,” he said, the rage in his voice barely subdued.

Her eyes filled with tears. “I…Might I use your handkerchief?”

He handed one to her. God, he couldn’t stand the tears. “Don’t cry Linnea. You know I’ll help.”

With his fingers under her chin, he lifted her face to the light. “How long has this been going on?”

She turned away from him. “Awhile.”

He poured a brace of whiskey into his mug and handed it to her. “It’s all I have.”

“Taylor!” John Newcomb bellowed from outside.

Linnea’s eyes widened. “I thought he was dead!”

“Taylor!” John was closer now. “You holing up with my wife? You send her on out here. We’ve got unfinished business.”

“No,” Matthew said, and motioned for her to stay put.

She grasped his arm. “Matthew. Be careful. He’s changed since you last saw him.”

He stared at her, taking in the changes the past few years had wrought on her. A hundred things went through his head in that moment, none of which he could say to her as a married woman. Why did you marry this animal? Why didn’t you wait for me? He sighed. At the least, he could protect her.

He squeezed her hand. “I’ll just talk to him. I don’t want a fight, but I won’t run from one either.” He reached into a desk drawer and drew out his Colt 44.

On the wharf, John Newcomb leaned heavily against the railing, his tie askew against his linen shirt. “Send my wife out, Taylor. She don’t belong with you.”

“You’re drunk, Mr. Newcomb. Go home and sleep it off.”

“I’m not leaving without my girls. Linnea! We need to talk. I…at least give me a chance to apologize.”

Matthew heard the door creak behind him.

“We’ll talk now,” John growled, and started up the gangplank, clutching his chest. “Then I’ll have words with Taylor, here.” Suddenly he stopped and leaned awkwardly on the ships railing. As he straightened, he pulled a gun from his belt and aimed past Matthew.

A shot rang out

Matthew watched in horror as Linnea crumpled to her knees, a look of stunned surprise on her face.

John stormed up the gangplank, aiming his gun for a second shot at her. “I’ll teach you to at shoot me.”

“No!” Matthew roared. He whipped up his Colt and squeezed the trigger.

In the loud report of the gun, John Newcomb staggered, but then regained his footing. He swung his gun toward Matthew. “You can’t have her, Taylor. I’ll kill you both before I let that happen.”

Matthew steadied his gun, aimed at Newcomb’s chest, and fired.

Newcomb fell forward hard, landing with a heavy thud. The wharf’s gas lamp cast a yellow light over the blood saturating his shirt and dripping onto the wooden planks beneath him.

Matthew threw down his gun and hurried to Linnea. Blood trickled across her forehead. She was so still, so pale. Crouching, he gathered her in his arms, unable to breathe, afraid she was hurt—or worse–dead.

His heart pounded in his chest.

She raised her hand to his cheek, the worry in her eyes for him now. “Matthew, I’m all right.”

He let out a long, shuddering breath. “I thought…”

He hugged her to him, burying his face in her neck until his heartbeat slowed to normal. He couldn’t bear to lose her.

After a moment, she struggled up on her elbows. “Is he dead?”

Matthew followed her gaze. “I’ll check.” He walked over to the still form. Not breathing. He rolled Newcomb over to his back and felt for a pulse at his throat.

“What happens now?” Linnea asked, her voice shaking. “Should we contact the authorities?”

The Angel and the Outlaw © 2007 by Kathryn Albright
Permission to reproduce text granted by Harlequin Books S.A.