“He’s riding hard. Something’s wrong,” Brandon murmured. He adjusted his seat, pressed his knees to his mount’s flanks and urged his horse down the hillside.

As soon as Diego pulled up on the reins in front of them, Brandon realized the man’s cotton pants and shirt were soaked through. “What is it?”

“A wagon is stuck in the river.”

“An old man is caught up. His head is above water, but I don’t know how long he will last.”

“Water level is too high. It’s made that crossing dangerous.” Jake glanced over at Brandon, his gaze resting momentarily on Brandon’s bum leg before turning once again to Diego.

A knot of anger lodged in Brandon’s throat. It wasn’t like Jake to hesitate because of him. Leaning forward in his saddle, he kicked his sorrel. The horse lurched into a gallop down the slope.

They raced toward the river. A mile north of the big house they rounded the bend in the dirt road and slowed. Through the cottonwoods, they caught sight of the wagon half-submerged in the water. The ears on the two lead horses flicked forward nervously as the newcomers approached. 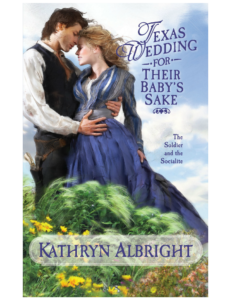 From the high bank, Brandon surveyed the surrounding hills, checking for signs of trouble—Comanche or hostile Mexicans. He didn’t fancy getting ambushed in the middle of the river where he and his brother would be easy targets. Reassured of their safety, he headed toward the wagon. Only it wasn’t a wagon, but a black carriage tipped halfway on its side against a large boulder and held there by the pressure of the current.

He dismounted and strode to the shoreline. The water sluiced by, crashing over large boulders as it raced downstream and created a terrific roar. The elegant crest on the carriage door lay half-submerged under the frothy surface and looked strangely out of place in this raw country.

“Dammit all!” Brandon swore suddenly under his breath as he recognized the fancy ornament. “That’s Franklin out there!”

Jake’s gaze shot to the crest on the carriage.

Brandon stepped into the rushing water, tensing against the slap of the current against his injured leg. Pain raced up his shirt and stole his breath away in a gasp. A hundred white-hot needles jabbed at his ankle. He clenched his teeth together. Once he acclimated to the pain he’d be all right. At least he hoped so.

“Head back!” Jake growled in passing. “I can’t worry about you too.”

Slowly, he made his way toward the carriage as Diego splashed into the water and raced ahead of him, catching up to Jake. The water coursed around Brandon as he maneuvered between a few boulders and sought to find stable footing on the smooth and slippery rocks in the riverbed. Although the day was warm, the water still felt cold as ice.

Jake made it to the carriage first. A shriek echoed from inside the conveyance and bounced off the rock walls on the far bank—a woman’s solitary enraged cry.

What was a woman doing riding with Franklin? If in fact the man in the water was Franklin.

Brandon reached the carriage just as Jake thrust a bundle of wet sky-blue material and soggy blonde hair at him. “Here! Take her! She’s not making any sense with her ranting.”

Momentum arched the woman halfway over his shoulder. Reaching in surprise, Brandon grabbed on as his weaker leg gave in and he lost his footing. They both slipped under the water. Her voluminous skirt, tangled around his arms and face as he wrestled with the cloth, trying to establish a solid stance and get both their heads above the surface. His arm butted against a hard object. He grabbed the carriage wheel and steadied himself.

The minute their heads emerged another scream rent the air right next to his ear. The woman struggled and pummeled his back. “Put me down!”

“As soon as I get you to shore, Ma’am,” he said, trying to ignore the woman’s hysterics and look for Franklin. He didn’t have time to consider what the man was doing traveling with this she-cat, but he’d sure expect some answers later—banking on the fact that Franklin was all right.

Jake appeared on the far side of the carriage.

“He’s all right, but he’s stuck under the carriage. Diego and I can get him.”

Brandon nodded. “I’ll head to shore then.” He turned, taking one step toward the strip of sand on the bank when something stopped him, nearly pulling him over backwards.

The woman held tight to a cloth that disappeared under the coach.

“Let it go or we’ll both go down again.”

Still she wouldn’t release the fabric.

“I gave you good warning,” he said through gritted teeth. Quickly he whipped the knife from his belt and slashed through the cloth.

For a second her outraged gasp was all he heard—that and the roaring of the water. Then she found her tongue.

“How dare you! You don’t know what you’ve done.” She beat his back with her fists. “Put me down! You…you imbecile!”

“Don’t tempt me,” he muttered. It would serve her right. But it just didn’t seem the thing to do when he was trying to rescue her. He took an unsteady step toward the shore. This direction, the force of the water was stronger on his ankle. Thankfully, by now both legs were nearly numb. The woman wasn’t much weight, but her wiggling didn’t make the going easy. He had half-a-mind to spank her since she was acting like a child. Too bad it wasn’t in his nature. Heck, in the current situation, rather than quieting her, it might make her that much more of a wildcat.

Halfway to shore, he shifted her on his shoulder and off-balance a moment, he stumbled. His foot came down crooked on a large stone. His ankle twisted and white–hot pain seared through him. His vision blurred. He forced himself to take three more unsteady steps. The small beach loomed close. He might make it. On his last step he teetered and went down, face-first on top of the woman. Her extra layers of clothing along with what strength was left in his arms, softened the fall on the stand—for him at least.

Momentarily stunned, she lay quiet—for the space of a second. Maybe, just maybe, he would get a thank you out of her.

She pushed at him with renewed strength. “Get off me you big oaf!”

In this horizontal position, the blood returned to this head in a rush and her high-pitched words registered. He rolled off and sprawled on his back, letting his head drop back on the coarse sand. Slowly, the throbbing pain in his leg subsided. Stars spun on the edge of his vision. When they stopped moving, he opened his eyes.

The woman sat next to him, looking toward the carriage, her energy spent, gasping for new air. Pale golden hair hung in wet snarled hanks down her back to her waist. Her satin dress, the color of the sky, clung to her bodice and twisted around her legs. Fool of a woman. She would have drowned in all that material. He’d saved her life and her screeching was the thanks he got.

“I have never been treated so deplorably!” she began.

He could tell she was gearing up for a considerable rant and mentally braced himself while an uneasy premonition built inside. The voice. The form. They were all too familiar.

She pushed the hair from her face and then turned, her green eyes snapping fire as she readied her arsenal of words.

Her eyes widened and her cheeks, already pale from the cold water, drained further of color. “Oh dear,” she began awkwardly. “Oh…dear…”

In the two years he’d known her, he’d never seen her flustered. She’d always known the perfect thing to say on any occasion. He didn’t think he’d find anything amusing about this situation, as mad as he felt, but there it was.

“What? No words for me?” The sarcasm rolled off his tongue easily enough.

She clamped her mouth shut and glared at him.

He’d forgotten how beautiful she was—the flawless skin, the straight nose, and the generous rose-colored lips made for kissing. No. That wasn’t correct. He’d tried hard to forget ever since he’d learned of her engagement, shoving her memory to the back of his mind. She belonged to another time, another life—in Charleston. Definitely not in Texas.

And as far as he knew, she belonged to another man now. What the hell was she doing here?

His chest tightened with anger. He’d come to the conclusion that he’d never cross paths with her again, that they’d gone their separate ways. After her betrayal, Texas had seemed like a safe bet that he’d never lay eyes on her again. This country was no place for the proper Miss Benet or whoever she was now. What had Franklin been thinking to bring her and where was her fool of a husband?