TEXAS WEDDING FOR THEIR BABY’S SAKE 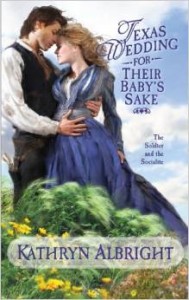 Texas Wedding for their Baby’s Sake tells the story of Brandon Dumont, the young brother of Jake Dumont from The Rebel and the Lady. After the fight for Texas and wounded in body and spirit, Brandon does not return home to his fiancee. Finding herself pregnant with his baby, Caroline travels to Texas to find him, only to realize the Brandon she once knew, no longer exists.

She wants him to care — about her, about life again — but Brandon is just as determined to send her back to the life she once knew, convinced that Texas is too rough for her. When he learns of the baby, he doubles his efforts. Then when his past comes back to haunt him ~ marauders intent on using Caroline for revenge, he must finally faces his demons.

“A story that tugs at one’s heartstrings.” 9/10 Historical Romance Writers

“Love makes all of us captives to our hearts.” Fresh Fiction

“He’s riding hard. Something’s wrong,” Brandon murmured. He adjusted his seat, pressed his knees to his mount’s flanks and urged his horse down the hillside.

As soon as Diego pulled up on the reins in front of them, Brandon realized the man’s cotton pants and shirt were soaked through. “What is it?”

“A wagon is stuck in the river.”

“An old man is caught up. His head is above water, but I don’t know how long he will last.”

Up to this point, things had been simple for Caroline Benét. A well-dressed young woman could always get assistance if the person helping thought they might obtain a coin or two for the trouble. All she’d had to do was wave frantically at the driver and pretend distress for him to stop the coach.

The driver had been easy to manipulate—a young man who looked more at her smile and the bit of lace she showed at her ankle than worry about the irregular nature of her situation. The rider in the coach was another matter entirely. A reluctant sigh escaped as she pulled the dueling pistol from her brocade reticule.