CHRISTMAS KISS FROM THE SHERIFF 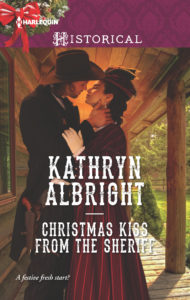 Christmas Kiss from the Sheriff
Heroes of San Diego Book #4

A Christmas to Remember!

Clear Springs’ new school teacher, Gemma Starling, feels as if she’s been given a fresh start. So long as no one discovers her dark secret–she once shot a man in self-defense!

Sheriff Craig Parker has forsworn love, but delightful Miss Starling intrigues him. And when events at the school turn dangerous, Craig won’t let her face it alone. Gemma might just be the one woman he could ever love, but will the secret she’s hiding tear them apart or bring them together by Christmas?

I LOVED it! Kathryn Albright has penned the perfect kiss of Christmas.
(M. Douglas/Goodreads)

This is a brilliant story! I especially enjoyed the twists at the end!
Very well written and a creative story that pulls you in!
I could almost smell the scents of Christmas as well as smoke!!
Now I have to go back and read the first books in this series!
Cindy Nipper

He rapped on the thick wood door before entering. A young girl in the first row was standing and reading aloud. At the front of the room, Miss Starling paced slowly, back and forth with a book resting open in her hand as she followed along with the reader. The white blouse she wore tucked in at her waist to a dark blue skirt giving her a crisp, professional air. She looked like a no-nonsense schoolmarm, pinched mouth and everything, in complete control, but he had to smile to himself at the amount of chalk dust streaking her skirt at her hips.

He started down the center aisle that separated the girls from the boys.

She stopped pacing and looked up from her book, frowning at his interruption.

“Miss Starling. I need you to step outside for a minute.”

Not the response he was looking for. “It won’t take long.”

She looked like she had just sucked on a lemon. Yep. The expression marring her pretty face at the moment was decidedly miffed.

She closed her book with a whump, the sudden noise startling half the class, and set the book on her desk. “Moira…” She addressed the young girl who had been reading. “Continue to the end of the page and then hand the book across to Uriah who will read on.”

As she strode directly in front of him and out the door he caught a whiff of the soap she had used that morning. It hinted of jasmine. A scent like that you didn’t forget. For a woman who was all business such an exotic soap was more than a little intriguing. He was pretty sure it wasn’t perfume—only ladies of the night used such devices—not sensible teachers. His mouth twisted in amusement as he followed her out the door.

“Now what is this all about?” she asked, turning abruptly to confront him at the base of the steps. Her deep brown eyes held his gaze, challenging him to make this worth her while.

“Found someone I believe is supposed to be here instead of down by the creek.” He nodded toward the girl that, despite his instructions, had moved and now hid halfway behind the shed.

Not again? “I ran into her downstream about half a mile from here.”

“I see. Thank you for seeing her safely here.”

She seemed to have thawed a bit for which he was grateful. That first look she had given the little girl was heavy enough to bow her small back with the weight.

“Tara Odom. What have you to say for yourself? Was it a rabbit this time? Or a squirrel? What was so fascinating that you would forgo class again?”

Tara didn’t answer at first, but stepped into full view. A second later her chin quivered and she hung her head. “I was looking for Billy.”

Miss Starling pressed her lips together as she seemed to consider her reply. No hint of a smile. No softening of her voice. “You have a responsibility to yourself. Your job is to learn. Concern about your brother is an admirable quality, but he made his own choice not to return after what happened this morning.”

Tears appeared in the little girl’s eyes. “I just want to know if he is okay,” she said in a small voice—a voice that now had a catch to it.

It seemed that the shiny copper penny had been forgotten. What had occurred that morning, he wondered.

Miss Starling squared her shoulders. “I’m afraid that I will need to speak with your parents about this.”

The teacher didn’t appear in the least affected by the girl’s tears. Craig couldn’t say the same about himself. He’d always been a sucker for a female’s tears—his mom’s, and Charlotte’s.

Miss Starling’s mouth tightened further. “I’m very disappointed in you. For the rest of the week you will stay inside at noon and work on your studies to make up for your lovely half day of recess today.”

“You may take your seat now.”

With her shoulders hunched, Tara shuffled into the school.

He told himself to keep quiet. It wasn’t his place to say anything. Yet he wasn’t happy with the woman’s attitude. Didn’t she notice the girl’s distress? It wasn’t like he’d caught the child stealing or setting fire to something. She had just been enjoying a little freedom and apparently looking for her brother. Guess it would be best if he left before he said something he’d regret. He walked over to the tie line to get Jasper.

Her voice carried a hint of the Eastern Seaboard. Maybe that’s why it had sounded harsh to him. With a tilt of his head he indicated the school door where the girl had entered. “Seemed to take things a mite rough.”

“It is her third infraction in four weeks. She has to learn she can’t come and go on a whim. She’ll never get anywhere being lackadaisical. Life takes discipline.”

“I know all about discipline and I don’t need a lecture on it,” he said quietly. From what he’d heard, this was her first year of teaching. He hoped she loosened up before too long or her students might make things real rough for her. He happened to know a bit about that—having been one of those students himself at one time. “Her brother is usually with her. He looks out for her.”

Her lips parted and for a moment she looked unsettled, as though she hadn’t actually thought about the two as family. Not really. “As sheriff, I’d think you would be on my side.”

“Not on any side. Just an observation. Kids play hooky all the time. It’s part of growing up.”

“The last time I checked, I was the teacher here. Tara needs to tend to her own troubles rather than worry about her brother’s issues. He has enough to worry about as it is.” She picked up her skirt and ascended the steps.

Where had she grown up? Under a rock? “Family loyalty means something to most folks.” The words tasted bitter in his mouth. Most folks, he reminded himself didn’t include his own.

With his words, she faltered on the last step, but caught herself. “I appreciate you seeing her safely here. I’ll take care of it. Good day, Sheriff.”

“One more thing,” he said, stopping her before she disappeared inside the school.

Her nostrils flared. She had a small nose. Cute. Distracting. And she wasn’t happy about his interruption in her life.

This was more important. If he remembered correctly, the Odoms’ property was about as far afield as a person could live and still be considered a resident of Clear Springs. The family’s low-slung cabin was little more than a shack hidden among the giant boulders on the eastern face of the mountain. The trail was nearly impassable. It was a wonder the girl made it to school at all. She was fortunate to have her brother’s company and care and likely wasn’t looking forward to traveling home on her own at the end of the day. “Have you ever been to the Odoms’ property?”

“No. But I have a good sense of direction. I’m sure I could find it.”

“It’s a fair distance, especially on her short legs. You told her she had to look out for herself. Well, I think she was doing that. It looks like her brother took their one and only ride.”

She shot a glance at the tether line. A long-eared mule usually stood there throughout the school day, stomping the ground and occasionally braying for attention. He’d heard it a time or two. Finding the animal gone took the starch out of her bonnet and for a moment she seemed at a loss for words. “So you do spy on me.”

She stared at him long enough that he wondered at it. “I’ll…I’ll see that she gets home.”

“You?” He didn’t need a lost teacher as well as a lost little girl on his conscience.

“Yes. Me.” That cute nose rose a little higher. “I can walk with her. I should speak to her mother anyway.”

He rubbed his chin, considering her—her clothes, the thin leather shoes she wore peeking from beneath her skirt. They didn’t look sturdy enough to hold up on a hike through the woods. “You won’t make it back to town before nightfall,” he said, none too happy about the prospect of heading that far out of town that evening. The Odoms stayed to themselves. The one and only time he had been to their cabin he had been greeted with a shotgun in his face. “The way I see it is…I’m taking her. It is my job to see to the safety of the people here.”

She arched a brow. “That’s commendable—and rather far-reaching for a description of your duties.”

He hadn’t expected her irritable attitude and wasn’t sure what to make of it, but this verbal battle wasn’t getting either of them anywhere. He wasn’t budging and neither was she. “I’ll come back at the end of school. We may both get a break and find that her brother has returned with the mule.”

She exhaled. “Fair enough. Thank you for bringing Tara back. If something keeps you from arriving at the end of the day, I will see that she gets home safely.” With a swish of her long blue skirt she disappeared into the schoolhouse.