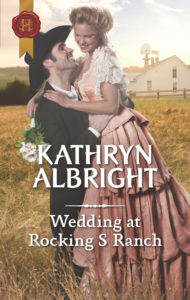 Can a Widow in the Wild West …find wedded bliss again?

When Cassandra Stewart fulfills her husband’s dying wish by visiting the ranch he loved, she planes to sell it. But then she meets his best friend. As aloof, ruggedly handsome Wolf shows Cassandra the value of life in the prairies, tenderness begins to grow from their shared pain into something more…  Maybe there’s a future for her at the Rocking S Ranch after all…

I especially loved Wolf and all he stood for.
This hero is one that stands out from the hundreds of books I’ve read!
Goodreads Review

The plot was riveting. I couldn’t put it down even when it was well past my bed time.
Long & Short Reviews

Wolf stood unmoving on the shaded boardwalk in front of his parents’ dry goods shop, and watched the woman on the platform. The sun slanted just above the horizon, casting her in silhouette and stretching her shadow like a sharp-angled ghost down Main Street. The black netting on her expensive-looking hat covered her face, the black feathers on top arranged artfully and yet tall enough to brush the underside of her opened parasol—a parasol fancied up with black lace and satin trim. Quite the sight for a simple town like Oak Grove.

He had a good idea who she was. Cassandra Stewart—the woman Doug had fallen so hard for. She was the reason Doug had dug his heels in about returning to the ranch. The way Wolf saw it, because of that she was also the woman who had had a hand in his death.
What was she really doing here? Her short note had only mentioned seeing the ranch and checking on Douglas’s grave site. There had to be more to it. Nobody traveled halfway across the continent just to see a piece of land. Especially some rich woman who looked to be more used to Sunday socials and carriage rides in a manicured park than a wild prairie.

“All aboard!” the conductor called out from the train steps. The engine rumbled and the wheels creaked as they forced the massive metal beast to move. A whistle blew—a loud, sharp sound—startling the woman and making her grasp her parasol tighter.
Sanders, standing at the doors to the saloon, noticed her too. He started toward her, doffing his hat as he approached. “Daniel Sanders, ma’am. Help you with your bags?”

“I thought there would be someone here,” she said, her voice wavering with uncertainty. She glanced once more down the main street.

The action gave away her apprehension. Did she expect to be taken care of? Was she a hothouse flower whose only purpose was to look pretty? He couldn’t see Doug marrying someone like that, but it had been several minutes and she hadn’t moved from the platform.
Torn between giving in to the urge to assist her and his feelings of distrust, Wolf hesitated. He didn’t want Sanders bothering her, particularly if she was Doug’s widow. Even though he had reservations about her, it remained that she was Doug’s choice. That meant, in Doug’s stead, he owed her assistance. Besides, it wasn’t like him to deny any woman simple courtesy. Reluctantly, he stepped off the boardwalk, drawing her gaze.

“You need a place to stay?” Sanders inquired. “You are welcome at the saloon. Got a couple of vacated rooms upstairs right now.”
She flashed a startled look at him. “Thank you, but no.”

Sanders tipped his hat back, looking her up and down. “I’ll make it cheaper than what Austin charges at the hotel.”
She stiffened. “I already have accommodations.”

Wolf stepped up on the platform. “Raymond Wolf, ma’am. May I see to your things?” He figured that was enough of an introduction to have her either admit who she was or turn him away in the same way she had Sanders.

She peered through her hat netting, taking a good long look at him. For a moment, Wolf thought she was going to refuse his help.

Sanders snorted. “Well, what do you know…”

His tone caused a familiar tension inside. Wolf curled his fingers into fists.

“Guess you got what you came for, ma’am.” Sanders didn’t bother to tip his hat as he turned and headed back to his saloon.

At that, the woman visibly relaxed. Her shoulders lowered, and she took a breath before focusing again on Wolf. “I don’t mean to be rude. I wasn’t expecting… I mean… You are Douglas Stewart’s friend, aren’t you?”

He didn’t answer at first. He wondered what kind of assumptions she held about Indians.

This close, he could make out a few observations of his own. She was attractive, even with the dark smudges beneath her eyes. They accentuated the paleness of her skin. Large night-blue eyes with dark lashes stared up at him through the crisscross of black netting.
Her hair was the color of the sun. A few strands that escaped her bonnet floated across her cheek and shimmered, a pale gold. Had it been loose and flowing, instead of knotted up at the back of her head, he figured that sight would bewitch just about any man who had eyes in his head

The fact that she was dressed all in black swung like a silent weight between them. Nearly a year had passed since Doug’s death. She hadn’t come to witness her husband being laid to his final rest on the ranch, and that burned inside Wolf. “Cassandra Stewart.”

He walked over to her trunk, tipped it slightly and hoisted it onto his shoulder. “I’ll take you to the hotel. Tomorrow, when you have rested, we will go to the ranch.”

“You misunderstand, Mr. Wolf. I intend to stay on my late husband’s property. It is mine now.”

Her words echoed inside his mind. Mine now. It didn’t seem right. A part of him was angry that for the past year this woman hadn’t acknowledged her ties to the ranch and hadn’t asked after the men who worked there day after day. Now suddenly she shows up, calling the ranch hers when she hadn’t cared one whit about it before.

The entire thing left a sour taste in his mouth. Besides, it was late in the day to head there. That wouldn’t stop him if she were a man, but with a woman it was different. A lot was different. Did she really expect to stay with Barker and the rest of the ranch hands? They could be a coarse lot.

She tilted her head slightly. “No, you won’t escort me? Or no, I may not stay there?”

Although she asked politely, he detected a resolve beneath her words. He stood there, the weight of her trunk bearing down on his shoulder, getting heavier and heavier. The ranch was her property now, according to the banker and Mayor Melbourne. Not much sense for him to argue with her. “Are they expecting you?”

“I wrote to Mr. Barker, the foreman, at the same time I wrote to you. You are here.”

“Not because you gave me a date and time. I can see the train depot from my shop.” He wouldn’t admit that he’d been checking to see if she disembarked every time the train pulled through for the past three days.

“Oh. Well, then I’m very glad you noticed my arrival. Shall we go?”

“I was told it was only an hour ride.”

She frowned. “I need to stay there. It is at my late husband’s request. If you won’t take me, I must find someone else who will.”

He admired her determination—grudgingly—but that didn’t mean he was giving in. “Tomorrow. First thing. You can come with me or stay right where you are until morning. Either way, I’m taking your trunk to the hotel.”

Her mouth pinched in disappointment, but this time she picked up her carpetbag and hatbox and followed him.