THE REBEL AND THE LADY 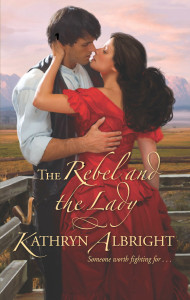 It’s 1836 and Jake Dumont cannot believe his younger brother has left a comfortable life in Charleston, South Carolina to fight in the Texan rebellion. Brandon’s departure was all Jake’s fault and he means to haul him back home to his fiance whether his brother wants that or not.

A drifter…a loner…Jake has never cared much for anything or anyone in his life. When he meets stunning Victoria Torrez, a Spanish aristocrat who cares deeply for her people and for her family’s land, he is rocked to the core. The lady has stolen his heart. Here is a woman who will lay her life on the line for what she believes.
Finally he’s found something worth fighting for.

“Sweet, romantic, and full of adventure…I was not able to tear myself away from this book.” 5/5 Coffee Time Romance.

The author dedicated this book to her husband by saying, “Here’s your western honey.” Boy howdy, does she deliver. I cannot recommend this one strongly enough to western fans and those historical readers who lament the rise of the wallpaper historical. Do not miss this book.”
The Good, The Bad, and the Unread.

Excerpt ~ The Rebel and the Lady

Victoria Torrez jerked awake from a dreamless sleep and glanced about her room. Nothing was out of place. The full moon shining through her window cast shadows of bare branches on the plaster walls. What had woken her?

She sung her feet onto the tile floor and tiptoed to the window. Nothing moved in the blue moonlight. A heavy frost covered the ground near the hacienda, unusual for this time of year, but then it had been an unusually cold, dry winter. The bats that lived along the Rio Grande had long since flown south. Even the owl that hooted in the ancient oak tree was still.

Her senses heightened, she moved to the opposite window to search the courtyard.

It came to her then—a steady, rhythmic trembling like thunder in the wake of an approaching storm. Her heart took up the cadence as she held her breath and listened, trying to understand what was happening.

The iron latch on her door jiggled. “Victoria? Wake up!” her mother urged with a frantic edge to her voice as she stepped into the room.

Grabbing her robe from the back of a chair and stuffing her arm sint the sleeves, Victoria secured the tie around her waist. “I’m awake. What is it?”

Victoria’s stomach lurched. “No! Santa Anna? It cannot be!” Then soldiers marched across their land! How many must there be to make the ground tremble?

Mama joined her and together they peered outside.

Victoria’s father stood on the far side of the ornate iron gate that closed off the courtyard. His back was to them, and although he had dressed hastily with his shirt hanging loose rather than tucked into his pantalones, his stance was wide and proud. His breath rose, a warm vapor in the cold air, as he spoke to another many who held himself tall, chin  up, his feathered hat tucked in his arm. The stranger wore a dark uniform with brass buttons that gleamed in the moonlight and a sword at his side. Not Santa Anna. She had seen a painting of El Presidente once when she visited Monterrey. Perhaps this was an emissary.              Behind him she could barely make out the gray forms of more soldiers standing in rows. With the low mist creeping from the river, her eyes failed to see beyond the third line of men, but there must be more. From what she’d heard, the general’s army was vast.

“Santa Ana was to come in the spring—and by boat,” Victoria murmured, still unable to believe what was before her.

“We will not see Monterrey now,” Mama said, her hands clasped and trembling around her beaded rosary.

Father had planned to take the family safely to his brother’s house before the army came. Victoria had spoken against it. She did not want to leave the cattle and horses to be used by the Mexican army. She would not hand over anything to them so easily.

Heavy footsteps in the great hall startled them both. Mama stepped forward and wrapped the ends of her heavy shawl across her chest, a five-foot, one-inch formidable fortress. Searching for a quick weapon, Victoria grabbed the silver letter opener from her writing desk and hid it within the folds of her robe. She moved next to her mother. Steadying her breathing, she prayed fervently the intruder was simply their cook.

“Esteban!” His name rushed from her lips as she recognized her childhood friend. His face was more angular now, more mature than when she had last seen him in the summer. “What are you doing here?” The moment the words were uttered she realized he wore a soldier’s uniform and carried a p8istol in his hand. A sinking sensation settled in her chest. He’d joined the Mexican army.

Daring a quick look around the bedroom he strode toward them, the sharp planes of his face stern. “Señora Torrez, Victoria—you must get out of here.”

“But this is my home,” Victoria said, raising her chin. “I will fight for it.”

His dark eyes flashed as he gripped her shoulders with his long fingers. “I have seen the army. There are too many coming.”

“And you have made it one more.” She shrugged out of his grasp, not caring that the anger in her voice was audible. How dare he do this! And now she realized the clothes he wore were not those of a common soldier. From the crown of the golden helmet protecting his head all the way to the bottom of his polished black leather boots, authority oozed from every inch of him. Gold epaulets padded both shoulders of his dark blue coat and a sword with a brass hilt hung from his belt.  Of course that would be the way of it. He was not a common man, after all, but one of the aristocracy of Mexico.

“Why, Esteban? Why did you do such a thing? You come now to fight against my family and steal our land? Land that has been ours for generations?”

His closed expression gave his answer before he spoke. “You had a chance to save this land, and gain more besides. But you refused me, remember? My over of marriage did not agree with you.”

Beneath his hard façade she could see the hurt her rejection had caused. In his eyes she caught a glimmer of what looked like…hope.

“I explained my reason. I will not have my future arranged for me. I will choose my own husband.”

“Your father has been too lenient with you.”

“I am his only child. Can you blame him for doting? I know you, Esteban. You would do the same with your daughter.” She’d hoped by being honest they could remain friends. She cared for him—but as a brother.

Moving to her bureau, she opened a small drawer and removed the engagement ring he had given her on her twenty-first birthday. She held it out until he reluctantly raised his hand for it. As she folded his fingers around the cold metal with her own she beseeched him. “You have always been a good friend. Do not ruin that now.”

For a moment he struggled with her answer, but then with his hand resting on the brass hilt of his sword, he hardened his jaw. “Now I choose my own path. In honor of my gentleman status, El Presidente has given me a commission in his army. I command a contingent of dragoons.”

“Then you had better get back to them,” a deep voice said from behind him.

Esteban spun around, whipping his pistol as he turned.

“No!” Victoria jumped forward, pushing the gun to the side. “What are you doing? You know my father! Often you have sat at our table.”

Esteban pushed her aside, out of his way, but never lost sight of the man before him. “Stay back.” He brought his gun back up and trained it on the man.

Her father spoke first, his voice calm but steely. “Do you come as a friend to this house, Esteban? Or as the enemy?”

The Rebel and the Lady © 2008 Kathryn Albright
Permission to reproduce text granted by Harlequin Books S.A.