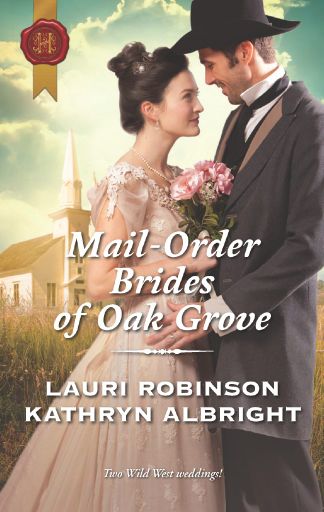 Join Maggie and Mary McCary in the first book of a new series from authors
Lauri Robinson and Kathryn Albright that are all set in the fictional town of Oak Grove, Kansas.

SURPRISE BRIDE FOR THE COWBOY by Laurie Robinson

Mary McCary never wanted to be a mail-order bride, but falling off the Oak Grove train
into Steve Putnam’s lap changes everything…Could he be the cowboy to tempt her down the aisle?

Running from trouble, Maggie McCary signs up to be a mail-order bride.
She doesn’t intend to actually marry… until she shares one sensational kiss with Jackson Miller!

“Two talented western romance writers team up for a delightful duet featuring twin sisters forced to become mail-order brides — or go to jail. Combining their talents to bring the McCary sisters and the town of Oak Grove to life takes skill and a true love for the old West. The short romances are sweet and realistic, charming and feel-good tales. Ideal for that quick bedtime read.”  K.Robin ~ Romantic Times Review 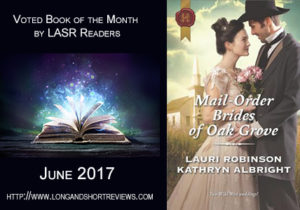 Voted Best Book of the Month
by
Long and Short Reviews!

The worst of the screeching subsided as the engine shuddered and then slowed to a turtle’s crawl.

Her three companions created a fair wall with their noses pressed to the glass. Maggie could only see bits and pieces of the town moving by through the spaces between the three—Miss Know-it-all Rebecca, Miss Quiet-and Quaint Sadie, and Miss Gullible Anna. She couldn’t understand why they were excited about a new beginning and gaining a husband along with it. She certainly wasn’t. That’s all her life had been for as long as she could remember—always a new city, a new town, a new horizon. A seed didn’t have time to flower, nor dust to settle, the way her family lived. And she sure didn’t plan to get yoked to a man. A man would only complicate things between her and her sister. He might even separate them.

But while she was here, she would like to see a real cowboy. One with boots…and a Stetson. Or one of those ten gallon hats that the other girls had been giggling about. Did cowboys always wear spurs? These were things a girl should know.

She stored the deck of cards in her satchel. It wouldn’t do to lose them. She might have need of a little spending money or even a little “get out of town” money.

She stepped behind Anna to peer over her shoulder. From this position all she saw was a small sea of dusty and dirty cowboy hats and bowlers. A few men waved faded flags—bleached by the sun and whipped by the prairie wind.

She swallowed. Men. All men. At least thirty of them. She rose to her tip-toes in order to see better.

Some were really young, but most looked middlin’ to old. A few appeared…weathered. One thing was obvious—no two of the men staring back from the station platform were the same. They were all shapes and sizes. And whether they wore big grins or not as they vied for the front row, they all looked curious to see who would be stepping off the train. Some, she noticed uncomfortably, appeared eager—a bit too eager.

With that thought she shrank back and looked in the seat behind her for her sister. Where had she disappeared to so fast? This bride contract had been her idea from the start. She should be here.

“Oh! I see the one I want!” Anna squealed, her voice blending with the last screech of the brakes.

The train shuddered horrendously to a complete stop. With it, a band started up. A band? A trumpet played Oh! Susanna! and was joined by the beat of a drum and the trill of a fife.

Panic seized Maggie. She wasn’t ready for this! “I have to find Mary,” she croaked out. Swaying slightly, she headed toward the back end of the railcar. She wanted to be with her sister when she faced the men gathered outside—not with these women she’d known only a handful of days.

The door before her swung open.

She glared at him. He was in league with the sheriff back in Bridgeport—that scoundrel.

Behind him, a man from the platform climbed the steps, pausing when he arrived at the top as if the exertion winded him. He was dressed in his Sunday best, right down to the gold watch fob and chain dangling from his black satin vest. The suit appeared a bit small at the neck…and other places. Probably cutting off his breath judging by the redness of his face. He peered first at her and then at the other women behind her as he blotted a trace of sweat on his forehead.

“Welcome to Oak Grove, ladies. I’m Mayor Melbourne.” He paused, looking over the four of them. The welcoming mien dissolved and he turned to the conductor. “Where are the rest?”

The man fumbled in his pocket, withdrew a sealed envelope and handed it to the mayor.

Mayor Melbourne pressed his lips together. He slipped his wire glasses from his vest pocket and settled them on the bridge of his nose, bending the ear wires over his ears. Then he broke the wax seal on the envelope and quickly read the contents. If possible his face reddened further.

“Not coming!” he sputtered. “Not coming! I asked for twelve and all that answered the call are these four?”

“Actually, Mayor, that would be five,” Rebecca said from over Maggie’s left shoulder. “Mary McCary is also with us…somewhere.”

“Five, you say? The committee sent enough money for twelve. My brother has some answering to do.” He read the letter again, the perturbed look on his face slowly settling into resignation as he folded the paper and stuffed it in his pocket. “Very well. Ladies? Welcome. Please come meet your town.”

She sensed Anna, Sadie and Rebecca gathering in force behind her. “What about our things?” she asked quickly, hoping to stall a few minutes longer.

“Plenty of men here to see to them,” the mayor said. “Please follow me. As you can see, they are anxious to have a look at …I mean…meet you.”

Behind her, the others pressed forward, prodding her out the door and onto the steps. A blast of warm Kansas wind swirled around her and picked up her skirt.

“Whoo-wee!” a man in front called out. “Got a looker right off!”

Her cheeks heated as she struggled to subdue the billowing purple cotton and then she focused on the gawker, raising her chin defiantly and fixing him with a bold glare. She would make sure never to find herself alone with him.

He grinned. “Got spirit too! She’s mine. Might as well just check her off your list, men. She’s mine! Whoo-ee!”

“Not unless you take a bath and wash off that cow smell, Rader,” someone yelled back. A round of chuckles from a few of the others followed.

Behind her, Sadie, Rebecca and Anna must have crowded into view for a cheer went up from the men. “Hip-hip-hooray!” Several even threw their hats into the air and the small band played louder at a furious pace.

Four strong-looking men stepped forward and with a great deal more enthusiasm than the situation called for, took hold of her upper-arms and whisked her—her body floating through the air—down the last two steps to the platform.

She wasn’t ready for this! Where in heaven’s name was Mary?