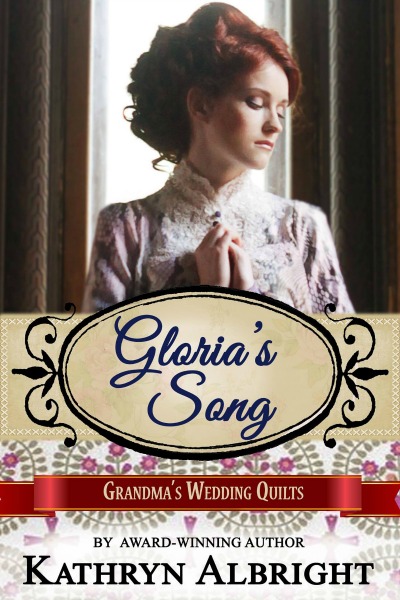 Gloria Palmer has always done the proper thing expected of her as the daughter of a shipping tycoon. The approval of her family and friends mean everything. And yet, when the perfect suitor offers for her… she hesitates.

Colin McDougal has little use for those living on the fancy side of the trolley tracks. He’s too busy managing the family pub and, in his spare time, writing down the lively tunes in his head. So, when Miss Palmer asks for his help to prepare for a music audition, he is flummoxed. What does he know of highbrow music?

But with each practice session, their feelings for each other grow. When it comes time for Gloria to make a choice between what is proper and what she desires, will she realize that if music can cross class lines, perhaps it can also harmonize two hearts?

Available for Kindle and in Print!

Winner of the 2018 Holt Medallion Award of Merit! 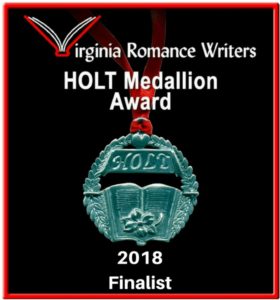 Lovely story, written with so much feeling. Touched something deeply inside of me. Completely got lost in this beautifully written book. Thanks for the joy I found reading this 11th book of Grandma’s wedding quilt. M. Gauvin

I hated to see it end. Arlene/Amazon Reviews

I enjoyed this book very much! It touched my heart in many ways! Highly recommend. Linda/Amazon Reviews

GLORIA’S SONG is one of eleven books from the GRANDMA’S WEDDING QUILT SERIES released in January of 2017. Grandma Mary’s traditional gift to each of her grandchildren was a hand-pieced and hand-stitched quilt, made with love and woven with memories, wisdom, and a family legacy of enduring love.

These Sweet Historical Romance Novellas and Novels (and one Prequel!) are from Eleven USA Today Bestselling, Amazon Bestselling, and Award-winning Authors.

Each book of this series is a sweet, clean (wholesome) romance, and each is complete with its own happily-ever-after. Books in the series are loosely connected and may be read in any order.
I do recommend reading the Prequel first. 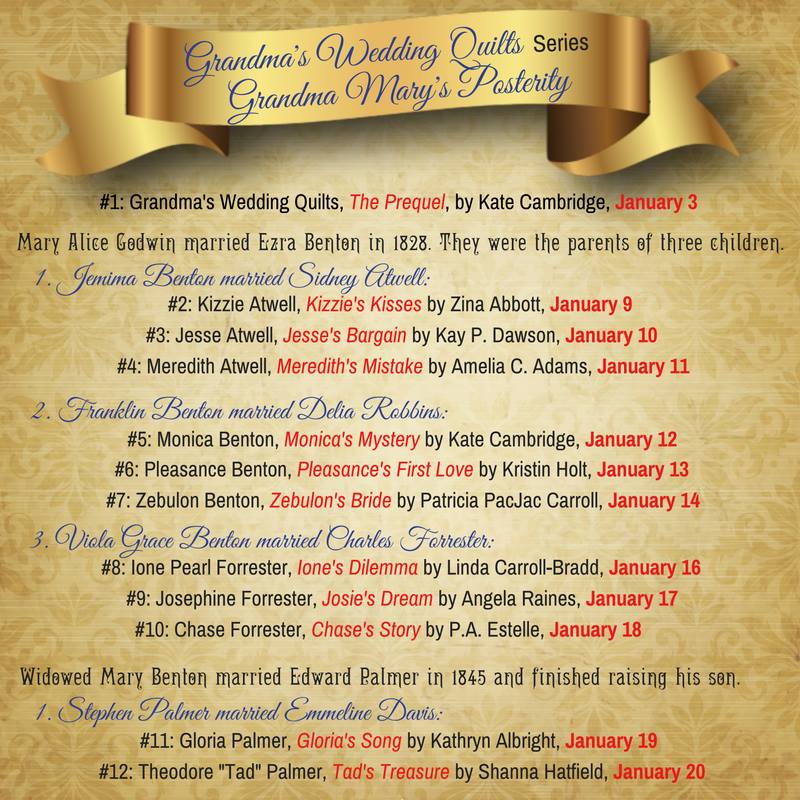 Colin whipped off his cap and followed the housekeeper down the wide, but dark hallway. On either side of the hall, arched doorways revealed rooms as big as the pub. To the right, a library was filled with books from ceiling to floor. To the left was a man’s study. More books. A globe of the earth. And a case of old rifles and swords, polished until the handles and blades gleamed. So this was what the rich dallied with in their free time.

He didn’t have much free time.

The housekeeper came to a door of glass panes that allowed light to brighten that end of the hallway. She opened it and announced him. “Mr. Colin McDougal.” Then she stepped back so that he could pass.

As he stepped into the room he smelled the heavy scents of flowers and rich earth, and felt the more humid weight to the air. The solarium, the housekeeper had said. He’d never heard of such a room. On two adjacent walls, winter sunlight streamed through large windows that looked out onto a large side-lawn covered with snow that stretched down to the river where a stand of pine and maple trees stood.

Large ferns cascaded from hanging pots in three corners of the room. More ferns sat here and there along the walls, along with a small desk which held an inkpot, several pens in a jar, and stacked blank paper. What a great place to write songs! In the center, on a wicker settee, sat two women who looked like older and younger versions of each other. Both were auburn-haired beauties.

The older woman stood. “I am Mrs. Palmer and this is my daughter, Miss Palmer. Please have a seat.” She indicated a wicker chair nearby. “May I offer you refreshment, Mr. McDougal?”

“I’m sure you are wondering why we have asked you to come here.”

He glanced at the younger woman. She studied him intently, even as she held herself aloof and quiet, sitting there in her ice-blue dress. “Yes, ma’am.”

“We enjoyed your performance at the club on Christmas Eve.”

“Glad to hear it. I was helping out my friend.”

“Yes. It took us a while to track you down since he was away on holiday.”

So, the club had covered up for Tom. His friend was often on a ‘holiday.’ “Well, you found me. What’s this all about?”

“It’s a bit…unusual.” For the first time, Mrs. Palmer’s poised expression faltered. Whatever ‘it’ was, they were uncomfortable talking about it.

“Just out with it,” he said, hoping to encourage her. He’d say the same to his own mother, but here, he wasn’t sure what was considered appropriate. They were so stinking rich. There were probably invisible rules he knew nothing about.

A frown of disapproval darted across the older woman’s face, confirming his thoughts.

“All right then. My husband—”

“Mother. Allow me,” the younger Miss Palmer said quickly. “The way you played the piano at the club on Christmas Eve caught my father’s attention. I’m sure you remember that he spoke with you from the carriage.”

He remembered all right. But in his mind, she had been the one more interested in his playing. “Yeah,” he answered carefully.

“Father thought it might be beneficial for me to assess your technique at the piano—just for an hour—and possibly garner some tips to improve my playing.”

He raised his brow. “Technique? I’m not sure…”

“I want to understand your process at the keyboard,” she said quickly.

What was she talking about? His process? He just sat down and played. That’s all there was too it.

“I’ve had years of lessons. I should be able to spot your technique without difficulty and appropriate what will work for me.”

He snorted softly, finding the way she spoke amusing. “You mean like a beer master giving away his brewing secrets for nothing in return.” His cousin, Patrick, would have a time with that one. A brewers’ recipe was his signature of the craft.

Miss Palmer blinked, obviously shocked at his bluntness. “I suppose that is one way to look at it.” Then her pretty, green eyes narrowed. “I see that you find this humorous. Let me assure you…it is not.”

So, this princess wanted something from him. Interesting. She was being careful with her words, as though she had to maintain control of everything going on.

“If you ask me, it sounds foolish.”

She stiffened. “You might learn something from me as well.”

Most likely he would, but he would never admit it. Not to her. “I do all right on my own.”

“So, you are not interested?” She stood up quickly, relief smoothing out the lines above her brows. “Very well. Then I am sorry to have wasted your time and I’ll show you out.”

He rose to his feet, surprised to find that he was suddenly reluctant to leave. Guess he hadn’t charmed her. He’d been on the defensive since he’d arrived, when by most counts, he was a decent fellow.

“Now wait, Gloria,” Mrs. Palmer said, standing also. “You’ve hardly given Mr. McDougal a chance. You know your father will expect more. You need to give the young man that much.”

“I’m sure he has other things to do.”

It was like watching a game of table tennis and he wasn’t all that sure who he’d like to see win. He wasn’t sure he had any secrets to offer, but maybe something could come of this better than a wasted afternoon. The young Miss Palmer, although as cool as an iceberg, was an interesting woman. “You said before that this would be like sharing techniques. What would I get in return?”

“We have every intention of compensating you for your time today,” Mrs. Palmer said, and then added, “Monetarily.”

That last brought him up short. “You are saying…you’re going to pay me?” They probably had a grand piano. A nice one. What he wouldn’t give to hear one of his own songs played on a really good piano. The one at the pub was in a constant state of needing tuning no matter how much he worked with it.

“Yes. Whatever you made at the club on Christmas Eve. How’s that?”

“For an hour of playing the piano?” It was generous. And he could use the money. It didn’t take him more than a second to decide. “Sure. I’ll do it.”

Miss Palmer’s eyes widened and she turned to her mother, shutting him out. “This is absurd! You actually expect me to go through with this, Mother? With him? It’s embarrassing!”

“Only as far as it will appease your father. Nothing beyond that. You’ll remember I hoped you’d forget the entire thing and agree to the engagement.”

Colin clenched his teeth, no longer amused. He didn’t care to be talked over as though he was invisible. “I’ve got work to do back at the pub.” He took a step toward the door.

Miss Palmer glared at him.

An in that instant, he noticed a moment of defeat in her eyes. Between her mother and him, she didn’t stand a chance. And there was something else—a vulnerability that hadn’t been there before. It tugged at him. She was tied up in knots about something and it went beyond an hour of ‘swapping secrets’ over a piano.

“What can it hurt, Miss Palmer? It could be fun.” He threw the words out, a soft challenge. He knew the last was a bit cocky but hey, it was a chance to play on a piano that probably didn’t have any chipped keys and stayed in tune.

©2017 by Kathryn Albright
All Rights Reserved

I hope you have enjoyed the excerpt!
This story is available through Amazon. Purchase Link